Due to weather, the third and final deck pour has been rescheduled to Tuesday, May 26th.  Crews will be onsite by 12am to prepare for the pour, which will start between 2am and 3am.

CHARLOTTE, N.C. — Construction crews have started pouring concrete on the Hawthorne Lane bridge over Independence Boulevard after more than three years of construction.

The bridge work is part of the CityLYNX Gold Line Phase 2 project that will extend the current streetcar segment by 2.5 miles on the east and west ends of the line, according to officials with Charlotte Area Transit System (CATS).

Hawthorne Lane was closed in July 2017 and was only supposed to stay closed for 20 months.  As of May 21, 2020, the street is still shut down.  The city of Charlotte says the most recent delays have been caused by:

The project is now expected to be completed by Fall 2020 and is anticipated to cost a total of $150 million (provided through a 50/50 federal match).  The Phase 2 project will add eleven stops to the existing six, two which will be on Hawthorne Lane.

The final concrete deck pour is expected to take place on May 21st.  More concrete pours (for the bridge sides, medians, and sidewalks) will take place in the coming weeks, according to CATS.

More details and FAQs on the Phase 2 project can be found HERE.

This is a rendering of the reconstructed Hawthorne bridge. 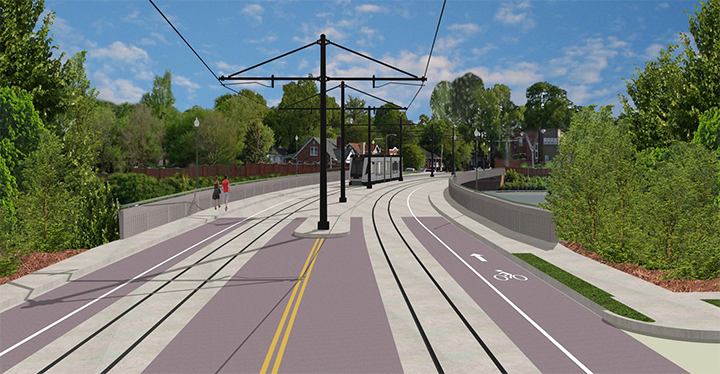