2014 Toyota Avalon in N Charlotte is praised by KBB.com! 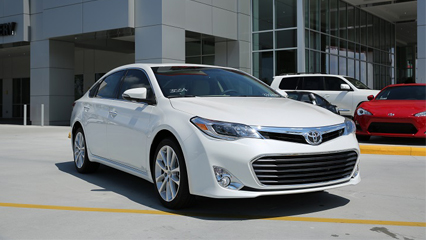 A lot of new Toyota in N Charlotte have been arriving at our dealership recently, and many of them are 2014 model-years! The 2014 Toyota Avalon has yet to make an appearance, and we can’t wait for it come to Toyota of N Charlotte. Why? Because it’s already getting rave reviews!

KBB.com takes a close look at the 2014 Toyota Avalon

The new Toyota Avalon in N Charlotte has been praised in the past for being a top luxury vehicle, especially since it got a new look for 2013. When it comes to the 2014 model-year that will be available before you know it, KBB.com has quite a few positive things to say about it. Here are some of the preliminary ratings this vehicle has already achieved:

The 2014 model-year is sure to deliver some stellar and enjoyable features. However, if you’re interested in experiencing this new Toyota today, the 2013 model-year is on our lot right now for you to take out for a test-drive! Here are some of the different elements you have to look forward to enjoying!

These are just a few of the different elements that come in the current model-year of this Toyota. We can’t wait to see what other features will be available when the 2014 model-year becomes available!

Take care of your budget with a new Toyota in N Charlotte!

If you love the luxury and sophistication that this new car can deliver, then why not opt to take it home today? With the option to buy or a lease a new car at our Toyota dealership, you can easily get the vehicle you want without having to completely rearrange your budget.

Come by and visit us at 13429 Statesville Road to take this luxury four-door sedan out for a spin today! You can also call our Internet Sales Team at (888) 883-3797. Remember, we’re open until 10:00 pm seven days a week so there’s always a good time to contact us!