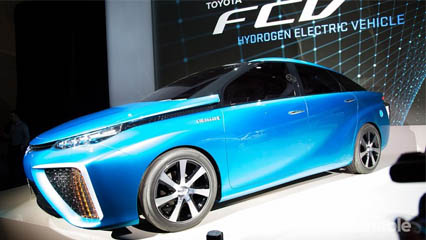 Toyota is always striving to produce vehicles that meet drivers’ personal preferences and also take care of the environment at the same time. When the Toyota Prius near Charlotte was introduced to American drivers back around 2000, it quickly became a popular eco-friendly choice!

Ever since then, more hybrid cars and green options have been arriving at Toyota of N Charlotte. Pretty soon a whole new type of eco-sensitive car might be available, though: one that runs off of electricity WITHOUT needing to be plugged-in!

What makes this eco-friendly Toyota so exciting? Where to begin! Here are the latest details on what this unique car has to offer:

As of now this Toyota concept car is scheduled to go on sale in 2015. Since it boasts an incredible design and is also able to travel 310 miles before needing to re-fuel, we’re excited for it to hopefully one day appear at Toyota of N Charlotte so drivers can take it out for a spin!

Even though this concept car isn’t available right now, there are still many other new Toyota in N Charlotte to enjoy that come with eco-friendly features. Just look at the all-new 2014 Toyota Corolla! The LE Eco trim-level of this car is extremely green. In fact, the 2014 Toyota Corolla LE Eco was just nominated for a Green Car of the Year award!

If you’re searching for an eco-friendly vehicle but aren’t which new Toyota might be the best choice for you, we can help! Our team is standing by ready to assist you with any questions and help you get behind the wheel of a green car today. You can always call our Internet Sales Team at (888) 883-3797 to set up an appointment, or you can swing by and visit us in person at 13429 Statesville Road in Huntersville! We can’t wait to see you!