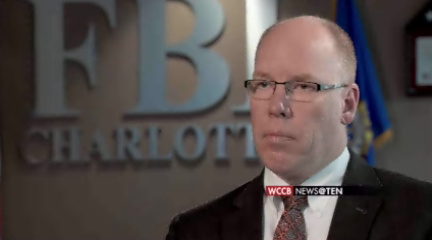 CHARLOTTE, N.C. – Brandon Devone Smith, a member of the Blood Nation gang, according to the FBI, was shot and killed after he shot and wounded a sheriff’s detective in October. It happened in Wilmington. In November, the FBI put police chiefs across the state, including Rodney Monroe, on alert that the gang may be seeking revenge on officers. “They’re trying to intimidate law enforcement, trying to intimidate those who cooperate with us, to address the heinous crimes that these gangs commit,” says Charlotte FBI Special Agent in Charge John Strong. “When they’re emboldened, it makes us even more committed than ever to take appropriate action, to identify the crimes they’re committing and hold them accountable to those,” says Strong.

The Bloods are one of the most prevalent gangs in North Carolina—but certainly not the only—says Strong. He says, “We have basically all the major gangs somewhere in North Carolina.”  North Carolina is home to about a thousand gang members, according to the FBI.

The FBI works hand in hand with agencies across the state in special task forces to combat gangs. The agency brings the power of federal prosecution, instead of state, to the table. Strong says, “They (gang members) are intimidated by the federal system, because there are long sentences and they have to serve the entire sentence, they don’t have parole after a short period of time.”

The Charlotte gang task force includes the FBI, Gastonia Police, Gaston County Police, and Charlotte-Mecklenburg Police. Strong says in Charlotte, home to at least 100 gang members, CMPD takes a particularly aggressive approach. “They’re success has actually driven a lot of these gang members to move outside of Mecklenburg County, and started showing up in the surrounding counties,” says Strong.

Strong says in addition to location, gang behavior has changed, too. “They still have colors to wear, but it’s not so much you see that showing up, and if you show up in a certain neighborhood wearing the wrong color, you’re gonna be shot. That’s not so much the case as it was years ago. As a matter of fact, we’re actually seeing the gang members working together, members of different gangs working together, to commit crimes such as distribution of narcotics,” says Strong.

Strong says the FBI works dozens of gang-related cases across the state every day. He describes gangs as having a revolving door of members, meaning they aren’t going away anytime soon.

Edge On The Clock: Would Blowing Up A Car Make You Feel Better About 2020?

COVID Cases Surging Across The Carolinas