The Get: CLT Special Agent in Charge John Strong 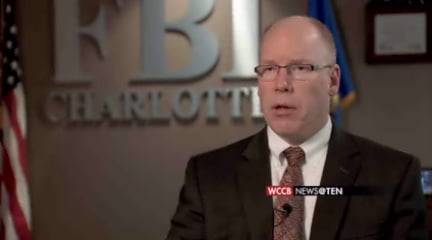 CHARLOTTE, N.C. – “No organization can take that type of hit without it having a negative impact on capabilities and performance,” says Charlotte Special Agent in Charge John Strong.  He is preparing for the worst, but hoping for the best when it comes to financing the FBI.

The agency, like many, is facing massive budgetary cuts as lawmakers work to hash out a deal to cut spending. The cut the FBI faces would return them to 2009 funding levels, with a 2013 work load; a work load that Strong says includes national security investigations right here in North Carolina, domestic and international terror investigations, counter intelligence programs, and more.

Strong says, “If the budget is passed with the way sequestration is set up, if it comes to fruition, the FBI will lose over $700 million of our budget, which is about ten percent of our budget.”

Strong says it means 3,500 FBI employees across the country—including agents and support staff—will be lost through attrition. Fifteen day—or longer—furloughs are also an option. This, and Strong says the agency’s budget is already lean. He says, “Sometimes we’re in a predicament where we have to decide between repairing a car and putting gas in it.”

The FBI has already enacted cuts on community outreach and training. Strong says even that leaves them in an uncomfortable position. “I don’t think anybody would like it if they were being held hostage somewhere in the United States, we call in our hostage rescue team who we’ve not been able to give as much training as we normally do, and their lives are suddenly depending on them being able to execute their skills flawlessly,” says Strong.

The newly proposed deal announced Tuesday allows for $63 billion in relief from automatic spending cuts over the coming two years. That could ease some of the budget cut pain for the military, FBI, and other programs, but specific numbers remain to be seen. Regardless, Strong says, “We will not fail our mission. We may not be as quick at it, we not be as effective. But we will not fail at it.”

Strong tells WCCB that while the news of a compromise is promising, the impact on federal agencies—including the FBI—is uncertain.