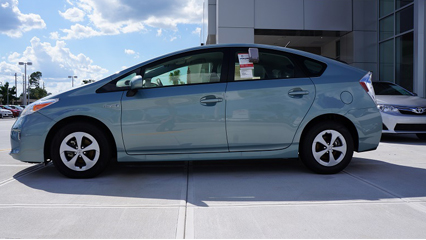 The all-new Toyota Prius in N Charlotte is an excellent transportation option that has impressed drivers more than one time over the years has long-established and praised history. If you’re wondering why so many drivers continuously turn to this model and the other models that belong to Toyota Prius family, Toyota of N Charlotte has the answers!

Learn about the Toyota Prius near Charlotte

This new Toyota hybrid has a history of excellence that can’t be ignored. Whether you’re looking for a new car that comes with the latest safety features or has great gas mileage, this eco-friendly new Toyota can easily meet these preferences. Just look at some of the accolades and awards it’s received in recent years!

A lot of work has gone into the development and design of this hybrid vehicle which has made it such a popular vehicle.

Where did the popularity of this vehicle first begin? This hybrid was first introduced to drivers overseas in 1997 but didn’t make its way on to US shores until 2000-2001. However, the eco-friendly technology that’s found in this vehicle was not created overnight. In fact, Toyota started working on hybrid technology back in 1992. Many developments and changes have taken place over the years to make this new Toyota hybrid near Charlotte a popular and viable eco-friendly transportation option.

A lot of work has gone into the new Toyota Prius that has developed it into the popular transportation option it is today.

If you’ve never test-driven this vehicle and are curious about how it handles, there’s no reason to wait. Stop by and visit us to get behind the wheel of one today and to take it out for a spin! We’re located at 13429 Statesville Road in Huntersville, and are open every day until 10:00 pm. You can even give us a call at (888) 883-3797 to set up an appointment beforehand!