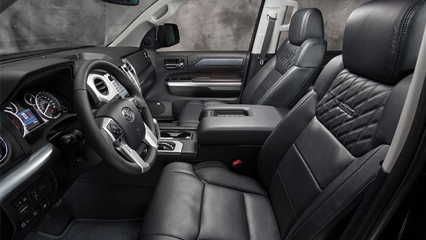 When you think of a pickup truck, it used to be that all that would come to mind was how powerful it was. Now, pickup trucks like the N Charlotte Toyota Tundra are not only made to work, they’re taken to a whole new level with style and luxury! If you want a vehicle that’s rough and tough, but you can also show off on the streets, check out the 2014 Toyota Tundra Platinum! This new Toyota in N Charlotte has an urban city theme with tons of upgraded features inside, while still giving you the capabilities of a powerful pickup truck!

If you’ve been checking out the Platinum edition of the 2014 Toyota Tundra in N Charlotte, you may have also noticed the comparable Ford F150 Platinum. These two pickup trucks are very similar, but you’ll notice some big differences when you take a closer look!

To help you make a wise decision between these two pickup trucks, we’ve done the research! We found this new Toyota truck beats its competitor in a number of different ways – including its price and features!

Like we said, the N Charlotte Toyota Tundra Platinum is a great option if you want a pickup truck that’s decked out with luxurious features and technology. You’ll find more of what you’re looking for in this new Toyota than the Ford F150 to give you added comfort, convenience and entertainment!

Even with all of this to offer, the N Charlotte Toyota Tundra Platinum is much more affordable than the 2014 Ford F150 Platinum! This new Toyota has a starting MSRP of $44,550, while its Ford competitor kicks off around $47,325! That’s about a $3,000 savings right from the get-go!

Come check out this new Toyota for yourself and get behind the wheel with a test drive! Our Toyota dealership is located at 13429 Statesville Rd. just off I-77 on exit 23. Contact our Internet Sales Team at (888) 883-3797 for more information.