2014 Toyota Sienna in N Charlotte takes on the Honda Odyssey 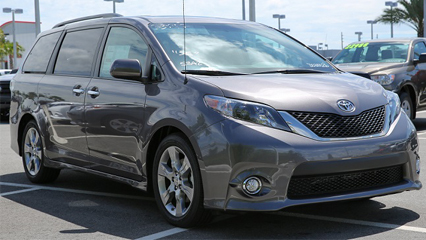 Finding the perfect family-friendly vehicle isn’t hard when you shop at our Toyota dealership. With so many great options to choose from, you’re sure to find the perfect fit! If you want the ultimate family car, you’ll get it with the 2014 Toyota Sienna in N Charlotte. More than 100,000 families choose this new Toyota every year, so you can’t go wrong! However, if you like to do some comparison-shopping before making your final decision, we understand. In fact, we can help! We’re comparing the N Charlotte Toyota Sienna with the Honda Odyssey to show to which minivan is the better option.

Space is important when you have a large family, but so is price. Luckily, you can have the best of both worlds with the N Charlotte Toyota Sienna. It’s super affordable with a starting MSRP of $26,920, compared to Honda Odyssey’s starting MSRP of $28,825! That’s nearly a $2,000 savings right off the bat! The Toyota Sienna is also made for large families with a ton of seating and cargo capacity. Overall, you’ll get much more space and comfort in this new Toyota near Charlotte!

Keep your family safe in this new Toyota near Charlotte!

Of course space is important for your large family; however, safety is a must! Luckily, the Toyota Sienna in N Charlotte received a 5-Star Overall Safety Rating from the National Highway Traffic Safety Administration (NHTSA)! It also comes standard with the Toyota Star Safety System, which is an exclusive feature in our new Toyota. This feature help you stay in control with enhanced traction, braking and stability. To top it all off, this new Toyota is the only minivan on the market to offer all-wheel drive!

Visit Toyota of N Charlotte for a test drive today! We’re located right off I-77 on exit 23 in Huntersville. Don’t forget to ask about our incredible specials to save even more money!