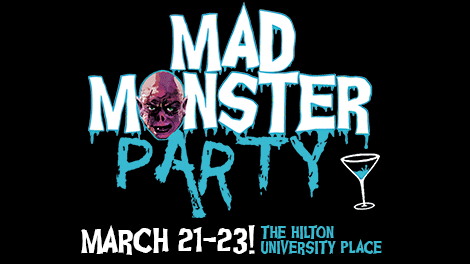 Viewers must text “MONSTER” to 45548 on March 21st, 22nd or 23rd by texting. A winner will be selected by 4 p.m. on Saturday, March 22nd and Sunday, March 23rd.  The randomly selected winner has one hour (by 5 p.m.) to claim the prize at the WCCB Charlotte booth inside the Mad Monster Party’s vendor room.

HOW TO WIN: No purchase necessary. Visitors to the Mad Monster Party convention will be able to text a keyword that is on display at the WCCB booth, to 45548. A winner will be chosesn at random at 4pm on both Saturday and Sunday.  The winner, each day, will have until 5 p.m. to claim their prize at the WCCB Charlotte vendor booth inside the Mad Monster Party’s vendor room.

ELIGIBILITY: To win, you must be 18 years or older and a legal resident of North or South Carolina. No employee of the Mad Monster Party, its affiliated artists and promoters (“Sponsor”), the Hilton University, its affiliated hotels or WCCB-TV (“Station”), their affiliated companies, his or her spouse, or immediate family members and/or those living in the same household of each shall be eligible to win.  Immediate family members include, but are not necessarily limited to, parents, brothers, sisters, nieces, nephews, aunts, uncles, cousins, and grandparents. Employees, or relatives of employees, of any television or radio station in the Charlotte Nielsen DMA or Charlotte Arbitron ADI are not eligible to win.  Additionally, Station reserves the right to disqualify any other person from participation in the Contest where such participation would, in the sole opinion of Station, compromise or give the appearance of compromising the integrity of the Contest.  No person shall be eligible to win any contest conducted by the Station more than one time in any sixty-day period.

2)  Station and Sponsor accepts no responsibility or liability for loss or damage due, in whole or in part, to the awarding, acceptance, possession, use or misuse of prize or from participation in the Contest.  Winner must sign a W-9 tax form and an affidavit/waiver that releases Station and Sponsor, their affiliated companies and employees from any and all liability and claims.

4)  Winner will be notified by text no later than 5pm on March 22nd and March 23rd. Winner must claim their prize at WCCB Charlotte’s booth inside the Mad Monster Party’s vendor room (inside Hilton University, 8629 J M Keynes Dr, Charlotte, NC 28262).