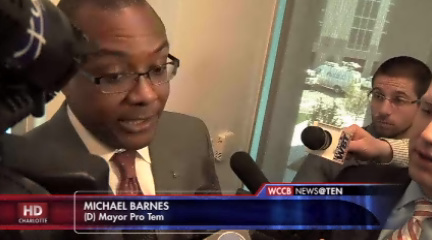 CHARLOTTE, N.C. – A powerful panel on stage at the grand opening and ribbon cutting of the new Met Life US headquarters in Ballantyne.  Mayor Pro Tem Michael Barnes, a Democrat, was a last minute fill-in for now disgraced ex-Mayor Patrick Cannon, a Democrat.

After the ribbon cutting, Governor Pat McCrory, a Republican, spoke to reporters about his connection to Cannon’s corruption charges.  Cannon allegedly bragged to an undercover FBI agent about his access to the President of the United States and Governor McCrory, saying the two were “very close.”  Cannon implied that, if bribed, he could and would influence McCrory to move the Gold Line street car project forward.

“The wound is still open,” said Gov. McCrory on Wednesday.  He continues, “There’s a personal wound that’s gonna take a lotta time with regards to that personal relationship.”
Unlike the Governor, Barnes didn’t make a move toward the media microphones, so the microphones moved to him.  Reporters asked: does he want to be the next Mayor of Charlotte?  “I have no plans of seeking the office,” says Barnes.
Barnes says on Monday, city council will meet to lay out the process to begin the interim mayor appointment.  A Democrat must be selected.  He or she will fulfill the remainder of Cannon’s term, about 20 months.  WCCB News @ Ten anchor Morgan Fogarty asked, “Mr. Barnes, have you had any contact or communication with Patrick since this happened?” Barnes replied, “I have not.  I did call to leave him a message, and left him a message, but I haven’t spoken to him.”
City councilman David Howard, a Democrat, says he hasn’t tried to contact Cannon and isn’t sure if he will.  When asked about the timing of the feds’ investigation and whether Howard was frustrated the FBI waited until after Cannon was elected mayor, Howard replied, “What I know is we don’t know everything yet. I’m sure they had their reason for doing what they did, and I’m sure it made good sense in whatever case they were trying to build.”