Two Arrested for Multiple Breaking and Entering from Vehicle Cases 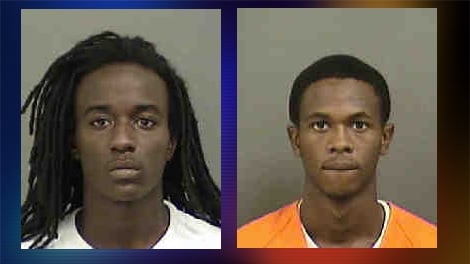 CHARLOTTE, N.C. — Two men have been arrested in connection to multiple breaking and entering from vehicle cases. Police say, on Friday, around 2:38 a.m., they were called to McAlpine Glen Drive in regards to a larceny from vehicle call. The caller stated that two suspects were breaking into vehicles in the parking lot and gave 911 dispatchers a description of the suspects. When officers arrived on scene they located the suspect vehicle which had side swiped a marked patrol car. The suspect vehicle took off from the scene and crashed nearby. Police say, the suspects then took off on foot from the damaged vehicle.

Officers say they set up a perimeter and with the assistance of the K-9 unit, were able to locate and arrest 22-year-old Deante Brown and 21-year-old Laquentin Winchester. Two firearms were also found on the suspects.

Based on information gathered during the investigation, officers determined that Winchester stole a 2001 Dodge Caravan on Keyway Boulevard to break into vehicles with Brown. Detectives say the string of break-ins occurred in one day on Amity Pointe Road, McAlpine Glen Drive, Endolwood Drive, Meadowdale Lane, and Carousel Drive.