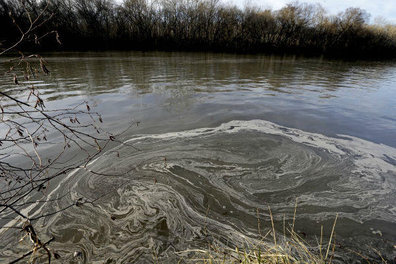 RALIEGH, N.C. — Duke Energy is ordered again by State Officials to address the piping systems in coal ash dams at three of the utility’s power plants.

A notice of deficiency letter to Duke Energy has been issued by the N.C. Division, Mineral and Land Resources on Wednsday for leaks the state agency found in the piping system at the utility’s Weatherspoon Steam Station in Lumberton.

The state discovered numerous gushers, drips and stains in the pipes while inspecting the video that showed a ruptured pipe caused a coal ash spill on Feb. 2 at the utilities Dan River facility in Eden.

The state could take enforcement action, including fining the utility up to $500 a day per violation, if Duke Energy does not provide a schedule for repairing the pipes at the Weatherspoon plant by July 20.

The utility received a letter from the agency this week that required the company to provide the state with an engineer’s assessment for the piping systems in the coal ash dams at the Sutton Steam Station in Wilmington and Asheville’s Steam Station.

No major leaks were discovered in the pipes at either Sutton or Asheville, but the inspection letter required Duke Energy to complete a more thorough engineering analysis of the piping systems because portions of the video were distorted or section of the pipes were not visible.

Earlier this week, the Division of Energy, Mineral and Land Resources, announced that it had ordered Duke Energy to submit repair plans for leaking pipes at coal ask impoundment dams at five other power plants in the Charlotte area and western North Carolina. The state agency is also calling on the utility company to provide engineering assessments for aging pipes at three of those plants.

None of the leaks have been identified as a posing imminent threat to the structural integrity of any of the dams, said Tracy Davis, director of the division of Energy, Mineral and Land Resources.

The infrastructure to be repaired includes concrete and corrugated metal piping components used to treat and carry waste water from the coal ash impoundments to discharge points.

The videos of other pipes in dams at coal ash impoundments by state engineers, and could issue further notices if conditions warrant.