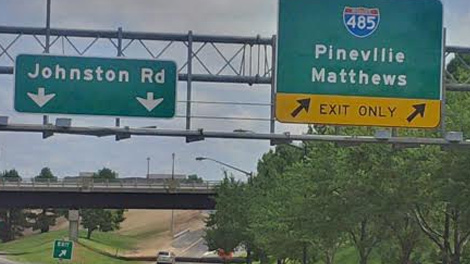 CHARLOTTE, NC– People have been anticipating the new I-485 loop from Johnston Road for over a year now, but they weren’t anticipating a misspelling of Pineville.
NCDOT released this information regarding the juvenile mistake around noon Friday.
“NCDOT engineers are aware of a misspelled word on a new sign along I-485 in south Charlotte.”
“The error was discovered as crews were preparing to open the new flyover ramp from Johnston Road north to the I-485 inner loop. Had the sign remained covered, it would have caused confusion for motorists wanting to access the new flyover bridge, and it wouldn’t have opened yesterday morning as scheduled.”
NCDOT says they will have the misspelling fixed by the end of the day Friday.