Get ready for back to school with the N Charlotte Toyota Sienna! 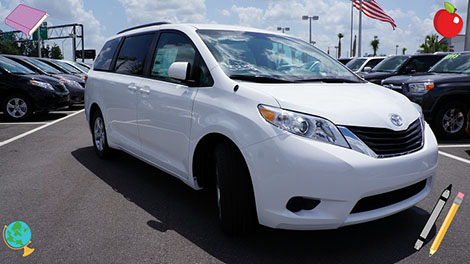 Back to school is in full swing—is your family ready for homework, tests, and carpooling? While Toyota of N Charlotte might not be able to prep your student for hard schoolwork, we CAN help you get to school back in style! You might not think that this 2014 Toyota Sienna near Charlotte can be considered sleek and stylish, but you’d be wrong. This iconic Toyota minivan is the perfect blend of sleekness, technology, efficiency, and safety. This new Toyota will make you the coolest parent in the carpool lane!

Toyota Sienna in N Charlotte is your biggest back to school ally!

So what makes the N Charlotte Toyota Sienna the perfect companion for the school year? Not only does this new Toyota near Charlotte boast enough room for you and yours, but it also has bevy of features that make driving around with your family extremely easy! Take a look at some of the features that make Toyota minivan has to offer:

New Toyota Sienna near Charlotte is a convenient ride

This Toyota minivan also has power sliding doors and liftgate to make loading and unloading cargo (like backpacks and heavy school books). The Smart Key System is also included, which makes getting in and out of the minivan simple and effortless!