Say goodbye to summer by off-roading in your new Toyota! 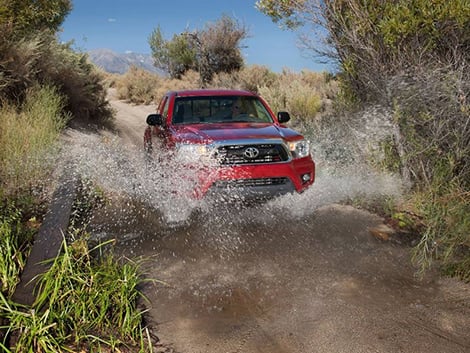 If you haven’t noticed yet, summer is coming to an end soon! While it may be sad to think about, there are many things you can do to celebrate the most carefree season of all. Sure, you could go to the closest beach and take a dive in the Atlantic Ocean, or you could even go camping in one of North Carolina’s many campgrounds! However, those who are constantly looking for an adventure might even think of something even more thrilling—off-roading! If you’re into that sort of thing, you’re in luck! Our new Toyota dealership near Charlotte is helping you go on your off-roading adventures!

New Toyota near Charlotte are ready for any off-road adventures!

You may be sad that summer is coming to an end, but you don’t have to bid farewell in a somber manner. You can definitely form some fond memories of Summer 2014 by getting behind the wheel of one of our new Toyota near Charlotte! Which new Toyota are ready to take you off the beaten path?

You’ll also be surprised to learn that the N Charlotte Toyota Land Cruiser can also lead you to the most fun you’ve ever had! Now that you know which of our new Toyota can actually let you go off-roading, you should learn some safe off-roading tips.

There are many things to keep in mind when you take your N Charlotte Toyota off-roading. While it’s a fun activity, it can turn dangerous if you don’t know what you are doing. Here are some tips to follow when you are going on off-roading adventures:

Saying goodbye to summer shouldn’t have to be a sad ordeal! Let Toyota of N Charlotte get you ready for off-road adventures. We’re located at 13429 Statesville Road and can be reached at 888-883-3797.