Edge on Demand: Should Vaping Indoors be Banned? 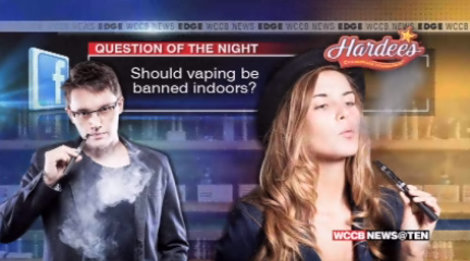 Some call them e-cigs, some call ’em vaporizers, some call ’em e-hookas.  But whatever you call ’em, the World Health Organization is calling them “dangerous.”  And there’s a new push to curb e-cigarettes and vaping at any indoor public places.  It’s a topic that has people fuming.

If you’ve been living on Mars for the past few years, e-cigs and vaporizers are electronic doo-hickies    that use batteries to heat a coil and turn a liquid into vapor.  That liquid is usually flavored, and most often has nicotine added.  And it’s a big hit with the kids.  More than 250,00 teens say they’ve tried them, triple the number from three years ago.  It’s actually become kind of a sub-culture, with people customizing their “vapes” and holding cloud contests.

So what do you think?  Should vaping be banned everywhere indoors?