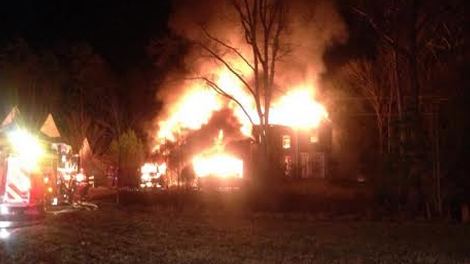 MINT HILL, NC– A Mint Hill man is being hailed a hero after he woke his family up and got them out a house minutes before it exploded.

The fire reportedly started around 3:30 a.m. Wednesday morning in the garage of a Mint Hill home in the St. Ives neighborhood.

Son, Kevin Stanfield, says he smelled smoke that woke him up prompting him to run to his families rooms yelling ” yo this isn’t a drill get up, get up,” said Stanfield.

Just when everyone evacuated the home reports say the roof exploded engulfing the home in flames but everyone is reportedly OK.

It took firefighters three hours to battle the flames before being able to enter the home but were able locate the family cat alive inside.