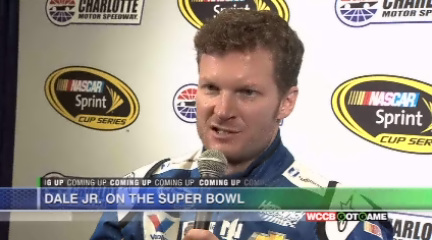 Everyone has a prediction on who’s going to win the big game. NASCAR star Dale Earnhardt Jr. is no different.

WCCB Charlotte had a chance to chat with NASCAR’s most popular driver about who he thinks is going to win the Super Bowl: New England or Seattle?

His answer may surprise you.

Earnhardt Jr. says he has respect for both teams and for both quarterbacks in the game, Tom Brady of New England and Russell Wilson of Seattle.
Dale Jr. also thinks the whole “Deflate-Gate” scandal that has encompassed the Super Bowl the last two weeks is a little over-blown.