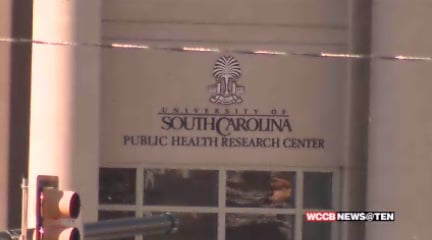 COLUMBIA, SC — It was a chaotic scene at the University of South Carolina as students and faculty received a text alert early Thursday afternoon saying, in part: “SHORS (sic) FIRED AT NEW SCHOOL OF PUBLIC HEALTH. Seek safe shelter.”

“The South Carolina Law Enforcement Department is currently investigating what appears to be a murder-suicide inside the building of the University of South Carolina School of Public Health,” said SLED Public Information Officer Thom Berry.

Dozens of law enforcement officials immediately descended on portions of College Street.  Agent Berry says that although students were advised to seek shelter, the shooting did appear to be an isolated incident.

“There was no active shooter situation other than the two individuals that are now deceased that were involved in this situation,” said Berry.

Agent Berry says the incident took place in a room inside the new Public Health building, but did not provide any further details.  He says there is no information on the two individuals.

“Richland County Coroner Gary Watts asked me to let you know that he will be conducting his investigation, but he is likely not to have any new information for your until late tonight, or perhaps tomorrow,” said Berry.

While law officials continue to investigate the incident, students at the University are still absorbing the day’s events.

“You never really expect it to be your school,” said student Kaleb Zuildema.

“I think at first it was just unreal,” said student Hayden Dunn.

The university is providing extra counseling Friday to any faculty and students who may need it.