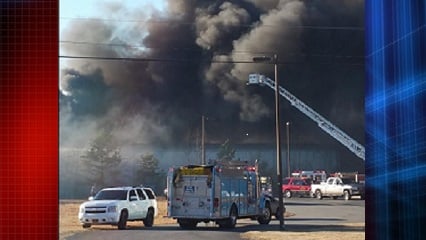 LINCOLN CO., N.C.– Crews in Lincoln County are working to put out a multi-alarm fire on Highway 16 South of Forest Oak in Denver.

According to the Huntersville Fire Department Twitter page, the fire first started as two large brush fires, but has now spread to a large commercial building in the area.

Officials say that foam and rubber behind the building, said to be a trailer plant, is causing the smoke to turn black. The fire has also reportedly spread to several tractor-trailers near the building.

According to an official on the page, there are a lot of fires in other counties and the department is warning that the weather is perfect mix for small fires to get out of control.