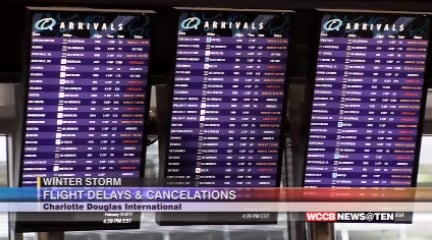 CHARLOTTE, NC — Crews have been busy at Charlotte-Douglas, de-icing runways and planes, trying to keep flights moving.  Airlines are urging people to check their flight status before heading to the airport.

Charlotte had 232 cancellations and 74 delays Monday, with many of those canceled flights scheduled for Tuesday.  Many travelers were scrambling to change plans, or found themselves stuck in the Queen City.

“The first flight was delayed to get here, so that flight that I would have caught was canceled,” said Michael Furforo of Albany, New York.  “And now the late night one has been canceled due to the storm.  Hopefully tomorrow mid-morning, but it doesn’t look good for that one either.”