Can You Imagine the Panthers Minus DeAngelo Williams? 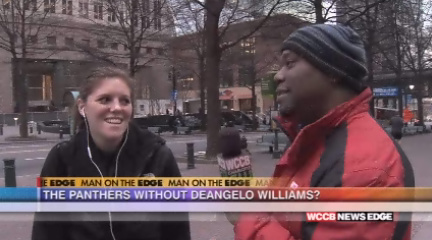 DeAngelo Williams: star running back for the Carolina Panthers, the franchise’s all-time leading rusher with 6,846 yards and 53 career touchdowns.  Now, after nine years, it looks like all that’s changing.

The buzz is that running back DeAngelo Williams is being released by the team.  Speaking to the local media, Williams said he was informed of the decision during a meeting last week with head coach Ron Rivera and GM Dave Gettleman.  Earlier, Williams tweeted, “9 years is a long time. it’s been a great run…”  Still, a team spokesperson tells WCCB Charlotte that DeAngelo has not yet been released.

This hits some fans the same way another release of a popular power-player did.  When Steve Smith was let go last year, some people were predicting the team would fall apart.  Letting our most consistent receiver go just didn’t make sense.  But it was a rebuilding step, and the team went on to win the NFC South.

With that in mind, Rance Adams hit the streets to find out if you could imagine the Carolina Panthers without DeAngelo Williams…