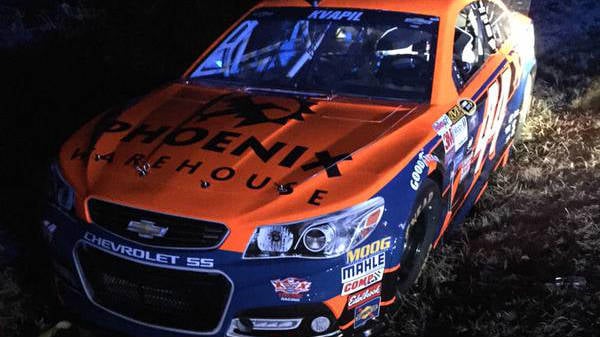 It seems the thieves of Travis Kvapil’s NASCAR car decided they had too much to handle and abandoned the #44 in some woods in Loganville, Georgia – about 35 miles north-west of Atlanta. The car was found early Saturday morning by police and Team Xtreme Racing has posted several updates, including photos, on Twitter about it.

The Chevrolet, valued at $250,000 appears undamaged but the theft of the car occurring the same day as qualifying, meant Team Xtreme had pull out of the Atlanta race.

Lost and Found section of the road. pic.twitter.com/L3cEdi9o0R

The pickup truck and trailer that was carrying the car and other equipment including a spare engine, are still missing. The theft was caught on camera as the SUV and trailer were taken from the Drury Inn’s parking lot close to Atlanta Motor Speedway, at 5:34am Friday morning.