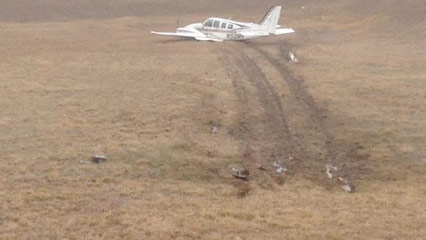 CHARLOTTE, NC — The Monroe Executive Airport is closed after a small plane missed the runway and ended up in a field about 100 yards north of the airport.

The Baron Beechcraft, with four people on board, attempted to land around 10 a.m. Wednesday, according to a city of Monroe spokesman Pete Hovanec.
The pilot and three passengers were not hurt, Hovanec said.  The runway will remain closed while the FAA conducts an investigation.
The plane is believed to be from Charleston, WV.  Check back for updates on this developing story.