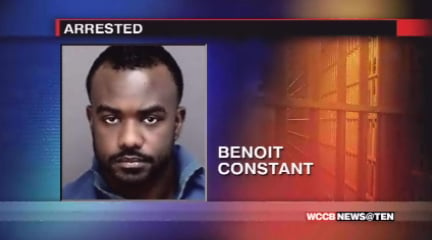 WICHITA FALLS, TX — A man who used an elaborate fake face during a bank heist in Cornelius is in jail in Texas.

Police in Wichita Falls, Texas arrested Benoit Constant during a traffic stop on Sunday.  He is accused of wearing a lifelike mask of an elderly white man during a bank robbery in December.  It happened at the Carolinas Telco Federal Credit Union on West Catawba Avenue.

Investigators say Milandra Constant called in a bomb threat to a local YMCA to divert police from the bank.  She was arrested in Maryland in January.