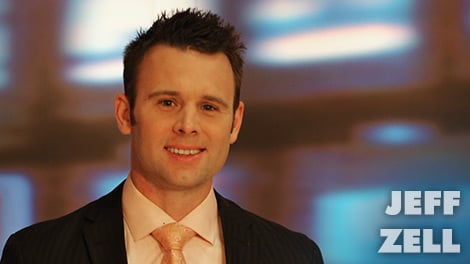 Jeff Zell joined the WCCB sports team in February 2015. If the last name is familiar, its probably because you are a big fan of WCCB News Rising like Jeff is. His wife, Kristine, has co-hosted Rising since 2013. Jeff spent last summer as the on-field host/emcee for the Charlotte Knights during the inaugural season in uptown. Before that, he spent four years as the Sports Director at the CBS affiliate in Myrtle Beach, SC. Prior to his time on the beach, he spent four years as a sports anchor in Mason City, IA. Jeff studied at the University of Texas in Austin and is a native Texan. He looks forward to covering professional sports teams in Charlotte, telling interesting stories and having a little bit of fun on “Got Game”. Jeff volunteers with a Charlotte-based organization, Right Moves for Youth. If you have a story idea, comment or suggestion you can email Jeff at Jzell@wccbcharlotte.com. You can follow him on twitter at: @Jeff_Zell