Edge on Demand: Dolce and Gabbana VS Elton John 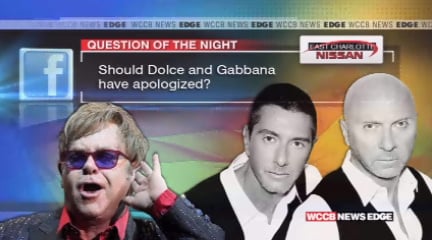 Support is growing for singer Elton John’s campaign to boycott fashion house Dolce and Gabbana.  At issue: the founders telling an Italian magazine that they opposed in vitro fertilization.  The magazine quotes the designers referring to IVF children as “chemical” and “synthetic”.

Elton John has two children with his husband through IVF.  More than 14,000 people have used the hashtag #BoycottDolceGabbana on Twitter to support him.  Meanwhile, the designers say their comments were not meant to “judge others”.

So what do you think?  Should Dolce and Gabbana apologize?  Or should Elton John back off?