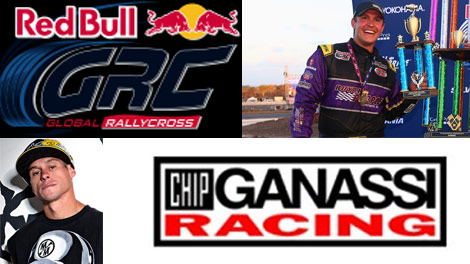 CONCORD, NC- Chip Ganassi Racing Teams, Inc. has announced that they will be expanding into the Red Bull Global Rallycross.

CGRT announced Wednesday that they will be forming a two-car (GRC) team with new partner Loenbro.

Concord based CGRT says they plan to house the two car team, driven by 16-time X-Games medalist Brian Deegan and Steve Arpin, at the same Concord shops as their Nascar Sprint Cup and XFINITY series.

Deegan will reportedly drive the No. 38 RockStar Energy Drink Ford Fiesta St in seven of the 12 races and teammate Arpin, assigned to the No. 00 ENEOS Ford Fiesta ST, will run the full 12-race calender.

Chip Ganassi, Owner, Chip Ganassi Racing Teams: “As a fan of motorsports I’m particularly interested in the GRC cars, their horsepower levels and the absence of traction control but make no mistake about it, we are in this series to win – both on and off the race track. Also, GRC has proven to be a very innovative and fresh take on today’s motorsport product. The series is targeting a new demographic and aligns with ours and more importantly with our partners’ focus on connecting with Millennials.”