Man on the Edge: Should the State Decide When a Team’s Season Ends? 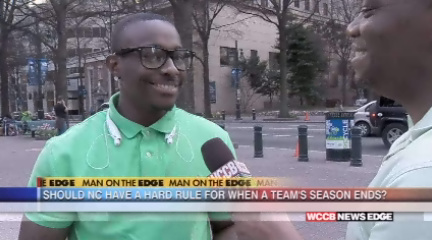 Tuesday, the State High School Athletic Association Board voted unanimously to deny the team’s request to play in the Dick’s Sporting Goods National Championship in New York City.  Myers Park is ranked number 4 in USA Today’s national poll.  They finished the season 29 – 1.  Still, a state rule prevents teams from playing games after their season is completed.

And that brings us to our Question of the Night: Should North Carolina have a hard and fast rule for when a team’s season ends?  Rance hit the streets to find out…