Man Pays for Billboard to Get Morningstar Tower Torn Down 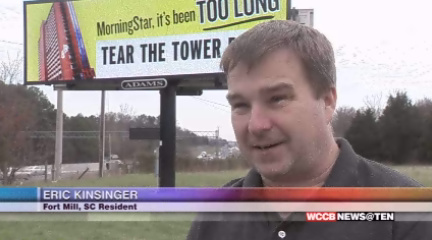 FORT MILL, NC — Tear the tower down.  That’s the message from a Fort Mill man who’s shelling out his own cash to get the dilapidated Morningstar tower torn down.

Since 2010, Eric Kinsinger has been spearheading the movement to knock down the tower.  His latest move is a billboard on I-77 South just before the Carowinds exit.  Kinsinger says the tower has become an eyesore for Fort Mill residents.

“Take a drive by and look at it,” he said.  “Would you want that right by your house?  In your neighborhood?”

Morningstar Fellowship Church bought the 21-story tower in 2004 with plans to renovate it, but those fixes were never completed.