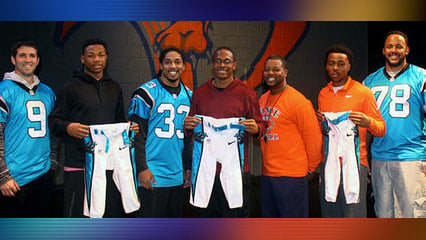 “They have worked hard and they deserve it for sure,” kicker Graham Gano said. “Hopefully, like their coach was saying, they are going to wear professional equipment during practice so hopefully that will motivate them.”

Vance High School went 11-4 last year and made it all the way to the state semifinals.

“Just when those guys walked through the door and Sir Purr walked through and watching our guys faces light up it was really, really precious to me,” Vance High School football coach Aaron Brand said. “This is a memory that I will never forget.”

The Panthers players spoke with the high school players and opened the floor for a brief question-and-answer session.

“To be that push for these guys and let them know that professionals do care about you,” second year safety Tre Boston said. “We are hear for you if you need us. If you have questions we are willing to answer them.”

Vance High School is one of 23 high schools in North Carolina and South Carolina receiving uniform grants.  The equipment received at Vance High, 60 pairs of pants, is valued at more than $7,000.