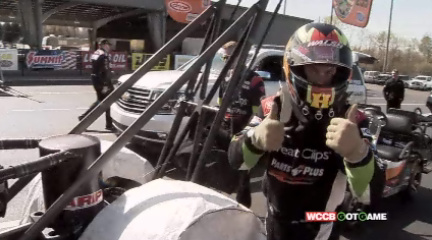 CONCORD, N.C. (WCCB) — 49 Year old Clay Millican is the type of guy who is always looking for the next rush.

“I have sky-dived, I have jumped off the Stratosphere in Las Vegas,” Millican said. “I road with the Air-Force Thunderbirds, anything that will make the adrenaline go up, I’m all for it.”

He’s for just about anything. Millican does not take a single day as a drag racer for granted. According to his bio on his website, he drove a forklift for Kroger Supermarkets before taking a full-time job as a hot rod racer. In the early 2000s, Millican won six consecutive IHRA championships.

“Year in and year out he’s doing so well because of his dedication and work ethic,” team owner Doug Stringer said.

“I’m an old guy, but I still feel young when I get behind that steering wheel,” Millican said.