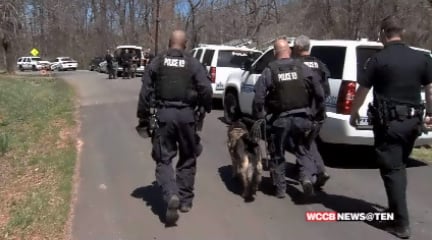 CHARLOTTE, NC — An attempted robbery turned into a shootout and manhunt in north Charlotte.  A man says he came home to find a guy breaking into his car.  The man and his 17-year-old nephew ran after the suspect.  They say the man had a gun and fired a shot, so they fired back.

The victims say the suspect ran into nearby woods.  Police have not found him.  Winding Springs Elementary School went on lockdown for about an hour as police searched for the suspect.