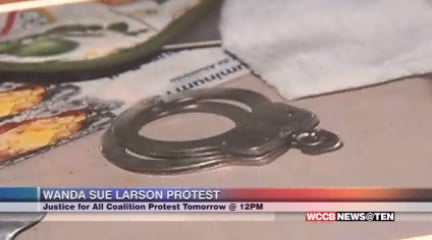 CHARLOTTE, NC — A call for justice after a former Union County DSS worker pleads guilty to child abuse.  Wanda Sue Larson was sentenced to between 6 and 17 months in prison Tuesday.  But she already served most of that time while awaiting her trial.

Saturday, the Justice For All Coalition plans to protest Larson’s jail release date outside the Monroe courthouse.

“So when you really think about this deal and all the abuse that was present in that house, and everything else, this plea deal is just not acceptable,” said Jeremy Bess of the JFAC.

WCCB Charlotte will be at Saturday’s protest.  Tune in starting at 6pm as protesters explain why they think justice has not been served in this case.