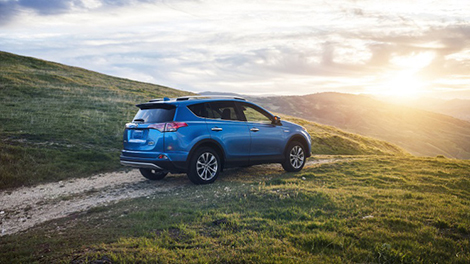 The 2015 Toyota RAV4 near Charlotte is, without a doubt, one of the most popular SUVs on our lot right now. It’s compact, sporty, maneuverable, and tech-driven. However, it’s about to go up another notch in terms of performance – 2016 will bring a hybrid model straight to our N Charlotte Toyota dealership! If you want the same incredible SUV with amped up fuel efficiency and a greener performance, read on – we can’t wait for this 2016 Toyota SUV to arrive at our lot!

The 2016 Toyota RAV4 Hybrid near Charlotte is definitely taking things to a whole new level. We don’t have specifics on the fuel efficiency it’ll be bringing to the table, but we can assure you it’ll be pretty phenomenal (after all, the current gasoline-powered model manages an impressive 24/31 mpg). However, we do have details about the rest of the 2016 Toyota RAV4 Hybrid near Charlotte… check it out!

Even safety has been enhanced on this N Charlotte Toyota SUV! The 2016 Toyota RAV4 Hybrid will be rocking Toyota Safety Sense, which is a new safety technology system recently unveiled at the New York Auto Show. It blends features like the Pre-Collision System, Automatic High Beams, Lane Departure Alert, Frontal Collision Warning, Dynamic Radar Cruise Control, and even a pedestrian Pre-Collision System!

Obviously, we can’t wait to see what the N Charlotte Toyota RAV4 Hybrid will have to offer – this is just the tip of the iceberg. We’ll let you know as soon as we have an ETA for it and in the meantime, come see how amazing our current hybrid car selection is! Give us a call at (888) 883-3797 today!