The Edgeitators: Should Police Investigate Themselves? 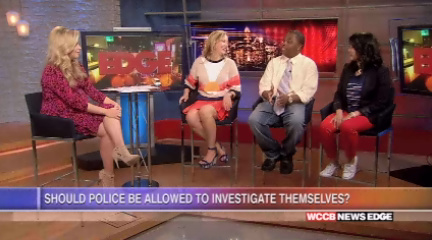 A CMPD officer, involved in three on-the-job shootings in the last two and a half years, has been cleared in the latest case, which killed 20-year-old Anisha Fonville.  Thursday, the District Attorney said he would not file criminal charges against Officer Anthony Holzhauer.  The DA says Holzhauer’s claim that Fonville lunged at him with a knife warranted the officer’s reaction.

Newly released dash cam video shows the moments leading up to the shooting death of Walter Scott on Saturday, but it does not show the actual shooting.  You can see Officer Michael Slager approaching Scott’s car.  He was allegedly pulled over for having a broken tail light.

They speak, and then Slager returns to his patrol car.  Moments later, Scott gets our of the car and runs away.  In cell phone video shot by a witness, Slager is seen shooting at Scott eight times as he runs away.  Officer Slager has since been fired and is now charged with murder.

So in light of these two cases of officer-involved shootings, do you think police departments should be allowed to investigated themselves?  Our panel of Edgeitators weighs in…