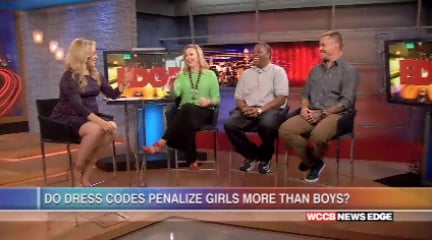 Outrage on social media over a Texas teenager who was sent home from school for wearing leggings and a long top to class.  The photo of 18-year-old Macy Edgerly’s outfit has gone viral since her older sister Erica posted it on Facebook last week.

Furious that school officials thought the outfit was inappropriate, she sounded off saying, “How about instead of body shaming women, school systems should start teaching 15-18 year old boys to stop degrading women with their eyes and contributing to the rape culture of today’s society.”

So do you think school dress codes target girls more than boys?  The Edgeitators take the topic to task…