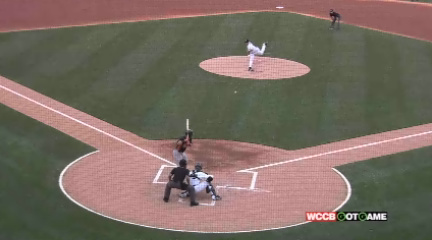 The Charlotte Knights pitching staff combined for 16 strikeouts in a 4-2 victory over the Norfolk Tides in front of 10,480 fans on a beautiful Saturday night at BB&T Ballpark.

White Sox top prospect LHP Carlos Rodon (1-0, 1.80) shined in his first start of the season, allowing only one earned run (two total) on two hits while striking out a career-high nine Norfolk batters.

The Charlotte bullpen was dominant for the second time in three nights, with three relievers combining to allow only one hit and no runs over four innings pitched.

RHP Maikel Cleto made his 2015 Knights debut, striking out four over two innings, and allowing one hit.

Arcenio Leon and Jairo Asencio each made their second appearances of the season, as Leon took over eighth-inning duties, walking one and adding one strikeout to earn his second hold of 2015.

Asencio claimed his second save in as many tries with a three-up, three-down ninth inning, including the 15th and 16th strikeout of the game for the Knights pitching staff.

Dan Black led the Knights offensive attack in his 2015 debut, tallying three RBIs on a pair of two-out singles.

In Black’s first at-bat of the season, he put the Knights on the scoreboard with a two-run single in the bottom of the second inning off of Norfolk starter LHP T.J. McFarland (0-1, 10.80), who was saddled with the loss. Black’s two-run base hit gave the Knights an early 2-0 lead.

The Knights added two more in the fourth inning, when Black’s second single of the game drove in Engel Beltre and Tyler Saladino’s infield single plated Matt Tuiasosopo to give Charlotte a 4-run lead.

Norfolk cut the lead to 4-2 in the fifth inning, as back-to-back walks to start the frame led to two runs on a Michael Almanzar single.

With Almanzar reaching third on a fielding error, Rodon buckled down and retired the next three batters to strand the runner at third base to maintain the two-run cushion.

Rodon’s final pitch of the night registered at 97 MPH on the radar gun, as he struck out Chris Parmelee looking to end the fifth frame.

The Charlotte Knights and Norfolk Tides conclude their four-game series in a Sunday matinee, as RHP Scott Carroll is set to make his 2015 debut on the mound against Tides RHP Zach Davies. Gates open at 1:00 p.m. and first pitch is scheduled for 2:05 on the first Sunbelt Family Sunday of the season, courtesy of Sunbelt Rentals. After the game, Kids Run the Bases, courtesy of Academy Sports and Outdoors.