Edge on Demand: Tim Tebow To Sign With Eagles 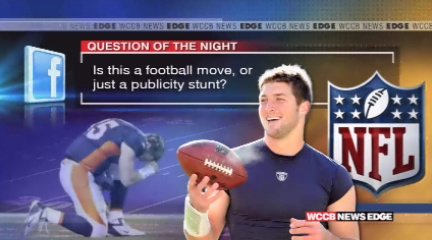 Our top topic tonight: Tim Tebow, back in the NFL!  The polarizing former Florida Gators quarterback has signed a 1-year contract with the Philadelphia Eagles.

The Heisman Trophy winner was a first-round draft pick for the Denver Broncos in 2010.  He played for three different teams in the NFL before being released from the New England Patriots in 2013.  He then became a commentator for ESPN and the SEC Network, and a contributor on Good Morning America.

But Tim Tebow has been the butt of many jokes, both on and off the field.  Some criticize his very public Christian faith, and his overwhelming amount of media coverage.

So do you think Tebow’s Eagles contract is a football move, or just a publicity stunt?