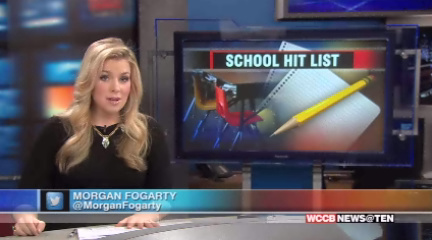 UPDATE: A possible “hit list” discovered at a local school, with names of potential targets.  Parents tell WCCB Charlotte they are worried about the safety of their children.

The school district told eighth grade parents at West Lincoln Middle that the list containing five names had been discovered Tuesday in a boy’s bathroom on the eighth grade hall.  Parents were told there is no danger, and extra security will be on campus Wednesday.

Pamela Irwin says her stepson’s name is on the list.

“I’m extremely frustrated with it, because it seems like now you can’t even send your kids to school and know that they’re gonna be safe and get the education that they need,” said Irwin.

The Sheriff’s Office is investigating the hit list.  Several parents tell WCCB Charlotte they plan to keep their children home from West Lincoln Middle on Wednesday.

Back in 2008, WCCB Charlotte reported on a similar hit list discovered in a classroom at that same school.

LINCOLNTON, N.C. — Deputies are investigating the contents of a note found at West Lincoln Middle School. Students from the school found the note on Tuesday beside a trash can in the boy’s bathroom on the 8th grade hall.

School staff say the note appeared to be a “hit list.”

The note is being investigated by the Lincoln County Sheriff’s Office. School officials say there will be increased security at the school on Wednesday.

Anyone with information about the incident is asked to contact the Lincoln County Sheriff’s Office at 704.732.9050.