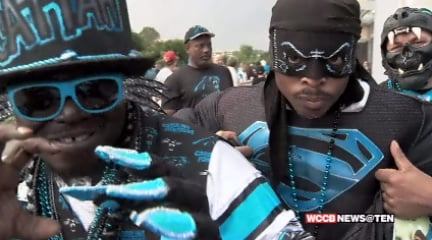 CHARLOTTE, NC — While General Manager Dave Gettleman, Ron Rivera and the team’s scouting department were in their draft room going over scenarios, Panthers fans were across town, patiently awaiting the pick.

Fans of all ages were showing their Panthers Pride at the team’s official Draft Party, anxiously waiting for Carolina to be on the clock.

“It’s torture!” said fan Lisa Bradle.  “It’s torture.  It’s like, okay, what are we going to do to pass the time?  But there’s great DJs, great music.”

And a great chance to meet players, including defensive end Kony Ealy and safety Tre Boston.

“It’s amazing, you know,” said Boston.  “It’s a night that we get to give back to them and see how excited they are about the draft as well as how we are, you know.  I feel like I’m getting drafted this season, how exciting it is around here.  The atmosphere with everybody, you get to meet all the long-time fans.”

And those long-time fans have their own ideas of who the Panthers should select.

“I love the Panthers all the time,” said Bradle.  “I think they should take Shaq Thompson.”

“I like the wide receiver position.  Devon Smith, give me a deep threat,” said fan Scott Webster.

“The tackles to me are not sexy,” added Webster.  “No need to get a second round guy in the first round.  That’s silly.  We don’t want to be like the Jets.”

“I don’t know, but I know he’ll be good,” said Boston.  “Because our last five picks have been amazing.  When we do pick him, welcome to the team, whoever you are!”