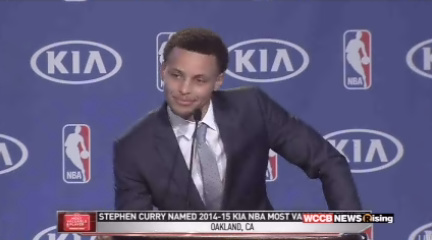 OAKLAND, CA –  On Monday it became official, the Golden State Warriors point guard, Stephen Curry was announced as the NBA’s 2014-2015 most valuable player.  He became the first Warriors player earning the honor since Wilt Chamberlain in 1960.  Curry  won  in a landslide with 100 of 130 first place votes.

Curry thanked everyone from his teammates to the equipment manager.  But, he got very emotional when he thanked his Dad, former Charlotte Hornet Dell Curry.  Curry’s entire family as well as his Warrior teammates were in Oakland to support him as he accepted the award.  But one person who wasn’t able to attend was Stephen’s Davidson College basketball coach Bob McKillop.  McKillop was overcome with emotion when he heard the news.