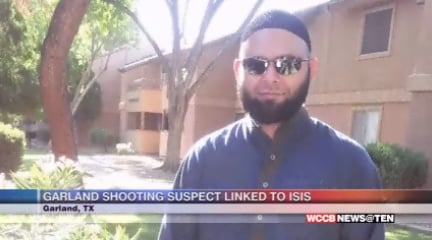 GARLAND, TX — New reports say that an ISIS sympathizer who organized an attack in Texas over the weekend spent time in Pakistan in the 90s.

Elton Simpson and Nadir Soofi opened fire outside a Prophet Mohammed cartoon contest in Garland, Texas on Sunday.  Investigators say Simpson sent a tweet before the attack, asking Allah to accept him as a jihadist.

“We think their strategy was to get into event center," said Joe Harn of the Garland Police Department.  "They weren’t able to get past our perimeter that we had set up.”

A security guard was injured.  Some claim the contest was designed to taunt Muslims, who consider cartoons depicting Mohammed offensive.  The event organizer says they were just exercising their First Amendment right.