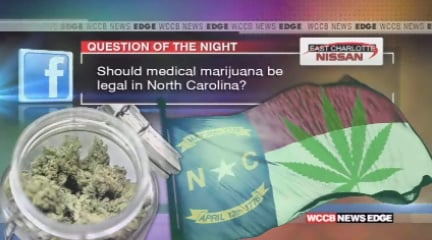 The push to legalize medical marijuana is much more than just a political battle in North Carolina.  As you heard WCCB Charlotte’s Audrina Bigos report on WCCB News @ 10, Tom is just one of many people in our area growing and smoking marijuana at home.  It’s a drug he says should be legal for medical use.

Representative Kelly Alexander of Mecklenburg County has been pushing for the legalization of medical marijuana for a number of years now.  He says that while the attitude toward legalizing the drug is changing, a number of lawmakers will not vote to approve it because they don’t want their names attached to controversy.

So what do you think?  Should medical marijuana be legal in North Carolina?