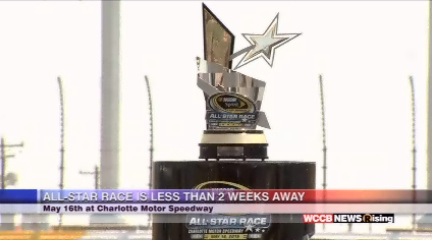 CHARLOTTE, N.C. – In less than two weeks the stars of NASCAR will battle it out for cold hard cash at this year’s All Star Race at Charlotte Motor Speedway.  The million dollar prize was front and center on Tuesday when Jimmie Johnson, his crew chief Chad Knaus joined Michael Waltrip and Rusty Wallace to celebrate the upcoming 30th anniversary of the All Star Race at CMS.  Four time winner Jimmie told Kelli why it is one of his favorite races.