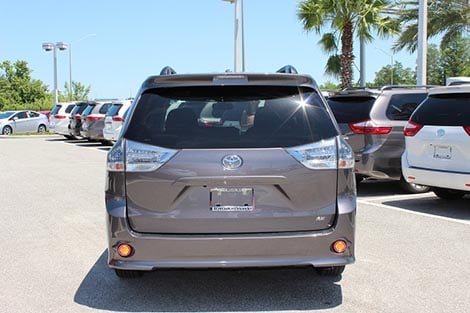 Are you in the market for a new Toyota near Charlotte that’s suited to getting your family out and around town? If so, we have a fantastic option for you – the 2015 Toyota Sienna in N Charlotte! This best-selling minivan is a fan favorite among families across the country, and it’s not only drivers that find it to be the perfect solution. It was recently named the Best 3-Row Vehicle for Families by the Greater Atlanta Automotive Media Association! It beat out six other competitors with ease, and we’re thrilled that it took the top spot on the list.

What criteria does the GAAMA use to make the list of possible vehicles and narrow it down to a winner? They look at things like:

We think the 2015 Toyota Sienna near Charlotte delivers on all accounts. Here’s why!

Get behind the wheel of the 2015 Toyota Sienna today!

Safety: The 2015 Toyota Sienna in N Charlotte offers you major safety features – you’ll get standard elements like an Advanced Airbag System and the Toyota Star Safety System, as well as elements like Daytime Running Lights and a Tire Pressure Monitoring System. You’ll even find Safety Connect Services as an option!

Interior Comfort: Stay comfy with fabric- or leather-trimmed seats in the 2015 Toyota Sienna – the second row has optional captain’s chairs, and all seats can easily be folded down and stowed to make room for more cargo. You’ll also love the roomy cabin and additional 39 cubic feet of cargo space to keep bookbags and sports gear out of the way and clutter-free!

Style and luxury: As we mentioned, the new Toyota Sienna near Charlotte offers an optional leather interior. However, it also throws in style and luxury with elements like Entune Premium Audio with Navigation, fog lights and a rear spoiler, Dynamic Radar Cruise Control, and 17-, 18-, or 19- alloy wheels. Plus,  you’ll find features in the 2015 Toyota Sienna like a power moonroof and three-zone automatic climate control!

Driving capabilities: The N Charlotte Toyota Sienna is a dream to hit the road in. It has a powerful 3.5L V6 engine under the hood, which means you’ll get 266 horsepower and 245 lb-ft of torque. Plus, it boasts capabilities like all-wheel drive (which isn’t found in many minivans), sport-calibrated electric power steering, active torque control, and front and rear parking assist sonar. Did we mention that this N Charlotte Toyota minivan also gets 18 mpg in the city and 25 mpg on the highway, which is pretty impressive considering how many passengers it can handle!

You can choose from five different trim-levels, too – the L, LE, SE, XLE, and Limited. It also has an affordable starting MSRP of just $28,600… and that’s before our amazing new Toyota Sienna deals near Charlotte!

Schedule your test drive today and bring the family! We’re conveniently located just off I-77 at exit 23 – stop by 13429 Statesville Road! We’ll see you soon!