The Edgeitators: Should Teens Be Banned From Tanning Beds? 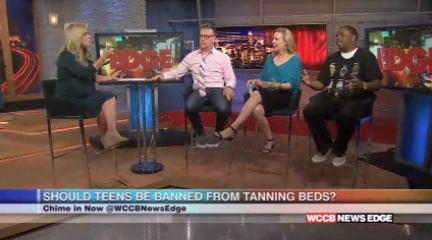 A complete ban on children under 18 using tanning beds in North Carolina is heading to Governor Pat McCrory’s desk.  The Senate voted 48 – 2 Wednesday for the ban.  The House approved the bill in March and previously in 2013.

Physicians and cancer prevention advocates have pushed for the prohibition for years, citing evidence that tanning sessions lead to increased risks of skin cancer.  Current rules require parental permission for children ages 14 – 17 to use a bed, and a doctor’s written prescription for those 13 and under.

So what do you think?  Should teens be banned from using tanning beds?  The Edgeitators weigh in…