The Edgeitators: Should Dzhokhar Tsarnaev Have Been Sentenced to Death? 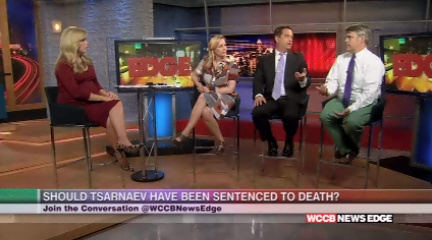 Dzhokhar Tsarnaev will be put to death for his role in the Boston Marathon bombing.  The jury deliberated for more than 14 hours over three days to reach this verdict, which had to be unanimous.

Tsarnaev was convicted on 30 counts for his role in the April 2013 bombing.  He was sentenced to death on six of those counts.  Witnesses in court say Tsarnaev had no visible reaction as the sentence was announced.  Tsarnaev will likely be sent to the Federal Death Row in Indiana.

Three people were killed and more than 260 were injured when two homemade bombs exploded near the marathon finish line.

So what do you think about the verdict?  Should Dzhokhar Tsarnaev have been sentenced to death?  The Edgeitators weigh in…