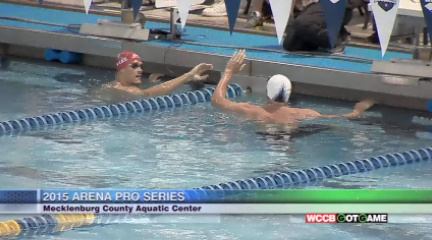 Lochte finished fourth Saturday in the 100-meter backstroke, won by Serbia’s Arkady Vyatchanin.
Meanwhile, Phelps came in seventh in the 200 butterfly, won by Chase Kalisz.
The duo had a potential matchup in the 100 backstroke. But Phelps withdrew from the event Saturday morning to focus on the 200 butterfly, which he had not competed in since earning the silver medal in the 2012 London Olympics.
Phelps and Lochte have two more potential head-to-head matchups Sunday at the Mecklenburg County Aquatic Center _ the 200 individual medley and 100 freestyle.
Other men’s winners Saturday were Josh Schneider in the 50 freestyle, Josh Prenott in the 200 breaststroke, Brazil’s Cesar Cielo in the 50 butterfly, and Connor Jaeger in the 400 freestyle.
Hungary’s Katinka Hosszu added two more women’s titles to her total Saturday, the 200 butterfly and 100 backstroke. Arianna Vanderpool-Wallace also was a two-time winner, in the 50 freestyle and 50 butterfly. Other winners were Micah Lawrence in the 200 breaststroke, and Leah Smith in the 400 freestyle.