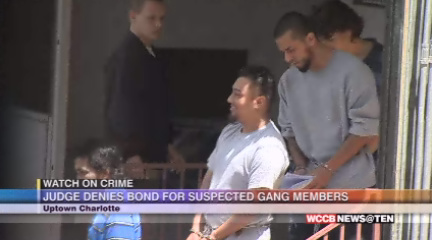 CHARLOTTE, NC — Several suspected gang members of the notorious MS-13 gang will remain in jail. 16 of nearly 40 suspects charged last week faced a judge Tuesday.  None were given bond.

Prosecutors say this group is younger, more brazen, and more violent than in the past.  The ex-wife of one suspect told WCCB Charlotte her former husband is innocent.

Prosecutors say the suspects were working to reorganize the gang in the Charlotte area.  They say their evidence includes wiretaps and information from confidential sources.

U.S. Attorneys say some of those arrested hadn’t been initiated into the gang, but attended meetings and helped supply weapons.